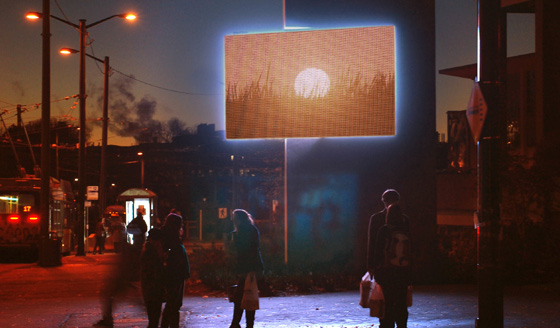 On Tuesday, December 21, 2010 we played a full length film, Time Being, by UBC Film Production Associate Professor Chris Gallagher. The film started at 4:16pm and played 1-minute clips for an hour. Here’s an excerpt from the promotion of this special winter solstice screening.

The obliquity of the ecliptic, a 23.5 degree axial tilt of our planet, is the anomaly that gives us our seasons. This tilt positions the North Pole farthest from the sun on December 21 at 23:38 this year and produces the shortest period of daylight for the year.

At sunset (4:16) on that day, Chris Gallagher will screen a silent one hour version of Time Being on the outdoor digital screen at UBC’s intersection of University and Wesbrook Blvd.

This winter solstice version of the film presents sixty one-minute images of time, many of which are summer images at the official beginning of winter as a kind of optimistic celebration of the fact that the following day will have one second more daylight than the previous day, seven seconds more for the next, 13 seconds more for the next etc. So on the first day of winter things start to move toward summer, no wonder it is difficult to experience the present.

Playing a full length film is a new way that we can utilize digital signage – in this case it was as an art installation. We often think of spaces on campus as having a multi-use aspect to them, I think it’s great to think of digital signage in the same way.

Here’s the trailer for the film:
Time Being (Trailer) from Chris Gallagher on Vimeo.